From Play del Ingles, in the south, to San Bartolome de Tirajana

This “VIP Tour” was organized by Viajes Tara, with tour guide extraordinaire, Gary. First stop was at a lookout called Degollada de las Yeguas. And what a view it was. From the south side, one can see cars winding up the road to the lookout from Playa del Ingles. Looking North, the Fataga Valley stretches out for several kilometres, leading to the small village of Fataga. Here the landscape is semi-arid.

Another View of the Fataga Valley

In the middle of this photo you see the hightest peak on Gran Canaria, Pico de las Nieves

Another stop along this tour was to try to catch a glimpse of the highest peak on Gran Canaria, Pico de las Nieves, at a height of 1,949 metres above sea level. And we were lucky! High above the clouds, we were able to get a glimpse of it. Close to this peak is a military base.We stopped at Villa de San Bartolome de Tirajana, or for short Tuntes, to get this photo. There are many cyclists biking to within a short distance of Pico de las Nieves. Many, I believe are getting in shape for the Tour de France. I can’t imagine myself biking up these steep roads with their hairpin turns. Our tour guide pointed out that he hasn’t seen one cyclist with a smile, and no wonder, considering the effort they must expend in reaching their destination. My hat is off to them!

On to Tejeda, Teror and an Aloe Vera Plantation

We headed north-west towards Tejeda, a village that sits on the eastern side of a volcanic crater. Along the way to Tejeda, we stopped to take photos, and I was lucky to get this one that captures the rugged nature of the area with its peaks and valleys.

Tejeda is located almost at the centre of Gran Canaria, in a very mountainous area. By the way, we traveled in small mini-buses, carrying eight people plus driver. I was very glad of a smaller vehicle, when I think of the narrow roads and hair-pin turns, it must be a challenge for the larger tour buses. 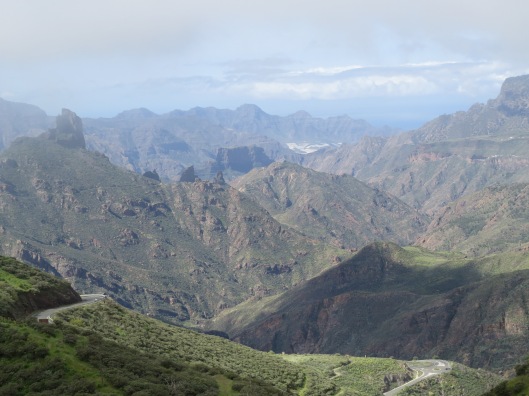 The photo above is taken from Tejeda and shows sharp peaks and deep valleys, evidence of volcanic action. In the upper right-hand corner of the photo is Rock Bentayga, located inside the volcanic caldera of Tejeda. Near this rock were ancient aboriginal settlements of the Guanches, the indigenous people of the island. 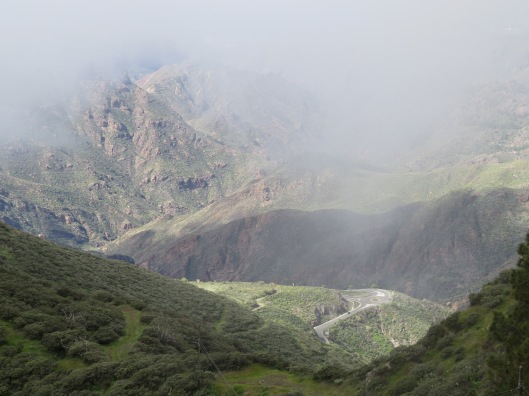 Taken from Tejeda as the clouds drifted in

Going further north-west from Tejeda, we made a few more stops, one to the charming town of Teror with its Canarian-style pine balconies; it is under monument protection. The town became particularly well known after shepherds witnessed an apparition of the Virgin in 1481; it then became the most important pilgrimage place in the Canaries. 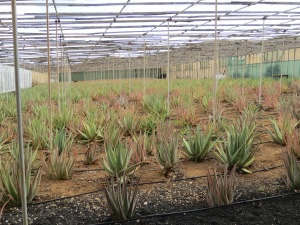 Last stop on the tour was to see an aloe vera plantation, a product the Canaries are famous for. At Fincas Canarias, we not only got to see the aloe vera growing in green houses( they have around 30,000 plants that are between 10 to 30 years old) but a explanation of its properties and benefits for the skin. Fincas Canarias is a family business dedicated to the ecological  cultivation of aloe vera.