My Inspiration and Passion for Travel

My reflection on the beach at Playa del Ingles.

Back in 1971 when I was 22 years old, I decided like so many other young people at the time to travel Europe with a knapsack on my back. I worked for a year, saved up, and I was off for three months exploring most of Europe.

Many of us were inspired by a book out entitled Europe On Five Dollars A Day, I believe the book was later updated to Europe on Ten Dollars a Day! It certainly served as an inspiration for a whole generation of young Canadians and Americans, many who had finished at least one university degree, to cross the Atlantic and explore Europe.

Many, like myself, did it on the cheap. I recall sometimes taking an overnight train so we could save on a hotel! Back then I travelled with friend, I wasn’t quite ready to go it alone. These days I often travel on my own, arrange my own itineraries, hotels and flights. When I reflect on this, I figure that I wouldn’t have visited half the places I’ve been to if I had waited for someone to accompany me. As I travel, I’ve also written for several publications as well as creating Armchair Travel Programs for senior residences in Ottawa.

I had the travel bug at a young age, maybe it came from growing up in Saskatchewan, where the prairies in the south part of the province, in wheat growing country, are truly flat as a pancake. Perhaps having this long view…and of wanting to see over the next horizon was the inspiration to “look beyond,” or to explore. My brother, who is a year older, is very much like me, he loves to travel, discover new places, and is quite the adventurer in the way he travels.

The Spanish Ham and Cheese Sandwich 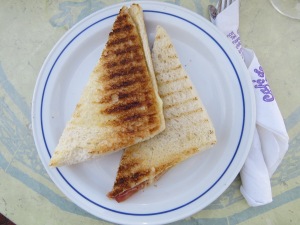 When I was travelling back in 1971 in Spain, one could find at almost cafe or restaurant a “Ham and Cheese Sandwich,” it was everywhere.And that was a good thing, based on my budget back then.It became quite a staple food item while travelling through Spain, it was cheap, easily digested and contained protein. It was even easy to say in Spanish, “Sandwich de Jamon y Queso por favor.”

There are many variations to this simple sandwich: you can have it grilled or not with just ham;just cheese;cheese and tomato; cheese, ham and tomato; or, the last version with more vegetables, one version like this on a menu was called “Sandwich Americano.” So it seems the original sandwich has evolved somewhat. Yet, it’s interesting how some culinary traditions stay the same. As I travel around Gran Canaria, and order a Ham and Cheese Sandwich, I reflect back to that time of travelling with a knapsack on my back.

Spain, in general, is a meat eating society, here in Playa del Ingles one finds  many steak restaurants, or where meat is the main dish. So it was a surprise to run into a Vegan restaurant in Las Palmas, called Zoe Food. I remember the words in the restaurant: “Please be patient, your meal is being prepared with love,” or something to that effect, words, certainly that reflect a certain philosophy about food and how it is served. Notice also on the sign, vegetarian, organic, and choices without gluten.

More Reflections on Travel and Meeting Other Travellers

As an independent traveller it’s nice to decide your own agenda, but it’s also great to meet other travellers to share experiences with, exchange ideas and generally enjoy each other’s company. There are many opportunities for this, chance meetings in restaurants or travelling on a local bus and not quite knowing how to get to your destination with a bus driver that doesn’t speak much English. I was on my way to Aguimes on a local bus trying to figure out where I had to transfer,and which other bus to get to go to Aguimes.

It happened there were two couples on the bus with the same perplexed and anxious look as myself, when we thought the bus ride was taking longer than it should as it meandered through a town, seemingly like taking the slow boat to China. Problem was resolved however, when the bus driver let us all off at just the right location to catch the connecting bus to Aguimes, and just in the nick of time as it was just coming around the corner on the other side of the road. We all scrambled to flag him down. I ended up spending the rest of the day with a lovely couple from Normandy, Daniel and Sylvaine. Together we explored the Guayadeque Ravine, had a meal together in a cave converted to a restaurant and shared a taxi back to Playa del Ingles, rather than risking another bus ride back with connections that are fewer between, and by that time it had also started to rain. We spent other days sight seeing together, and since they were French speaking, I had the opportunity to practice my French. 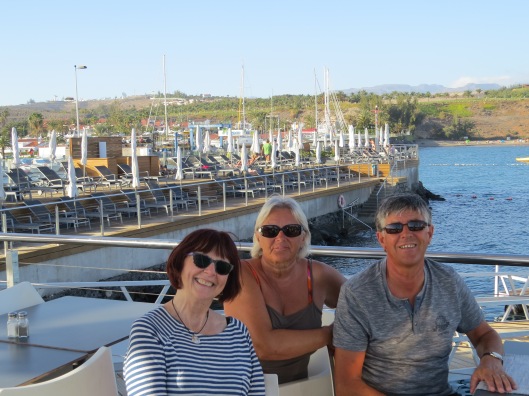 Visiting Pasito Blanco with travellers I met, Daniel and Sylvaine.

Another travel experience I had meeting another traveller was quite unique. I had taken the VIP Tour that I describe in my blog entry “A Tour of Gran Canaria” which took a group on a tour up to the mountains in central Gran Canaria and then further north on the island. When I got talking to a fellow traveller on the same bus, it turns out that his uncle was a Deacon in Moose Jaw, Saskatchewan, in the same town where I grew up in and lived from the mid-1950s to 1967. My father, who was Anglican, went to St. John’s Anglican church, the same church where this traveller’s uncle was the Deacon. Who would have thought in the mountains of Gran Canaria that two travellers would share a link to the same town in Saskatchewan, Moose Jaw! 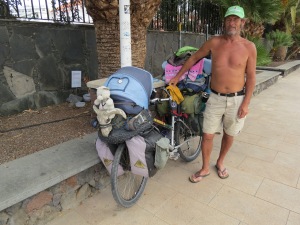 There are travellers and there are travellers. I met Adelina Manuel Lopes the other day while walking the boardwalk near the beach of Playa del Ingles. Adelina has travelled over 85,000 by bike over several journeys on the European coastline. He has actually made it into the Guinness Book Of Records for his accomplishments. I noticed he has his own blog on WordPress, if you want to see more about his travels.

When I arrived at Eugenia Victoria Hotel and started to write my blog, I had difficulty downloading my photos into the blog site, so I had to find a location that had a higher internet speed. A local guide told me about Kim’s Bar, just a few minutes from the hotel. It’s an English-style bar with TVs that broadcast live English soccer matches with patrons who get very excited about the game, even wearing jerseys related to their team. It caters to English patrons, serving English-style food, lots of beer on tap, and where the waiters and waitresses call you “love.” It has a warm and welcoming atmosphere, and where if you order a bag of chips, it’s a bag of “crisps.” Oh, and if you want you can get a grilled “Ham and Cheese!”