A Pictorial of Playa del Ingles

This entry is a focus on photos taken around the resort area of Playa de Ingles which falls within a larger area called Maspalomas. Maspalomas is defined as stretching to Bahia Feliz in the east, and to Meloneras in the west. It is a hot +31C today. The locals say it is actually hotter than the norm which would be about +22 to 26C.

Man holding onto motorbike — how does he do it?

This photo was taken at Faro de Maspalomas, near the lighthouse, about a five kilometre walk from Playa del Ingles. This is a real person holding on to the rear of a motorbike. How does he do it?? 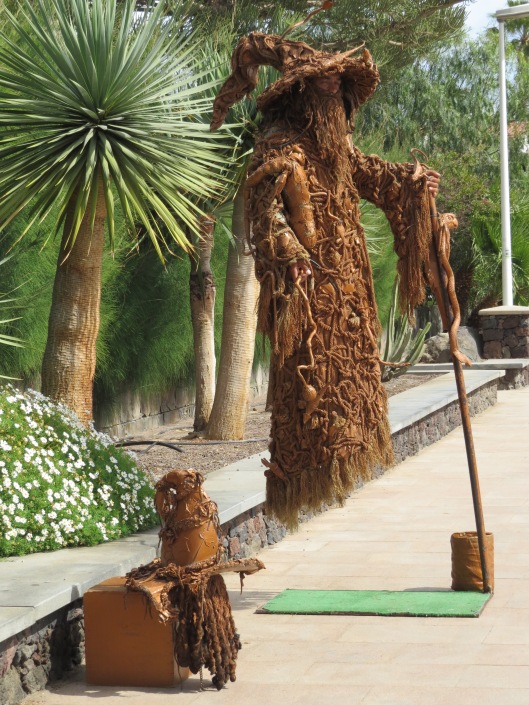 There are many people like this dressed up in costume and standing stock-still. When you pass by them, they might wink, or gesture with their hand, apart from that they don’t move. Some are in very heavy costumes so I don’t know how they stand it in the heat! They have certainly earned the few coins that people give them.

Hockey gear in the Canaries?

As I was walking away from the Yumbo Shopping Centre one day, I came upon this mannequin dressed in hockey gear. No, I said to myself, they can’t possibly be selling hockey gear in the Canaries. I had to investigate.This model of a hockey player was advertising hockey games that were being shown at The Red Cow and Shenanigans Sports Bar in Playa del Ingles. From what I understood of the advertisement, it was hockey from the Scandinavian countries. Hope there were no “shenanigans” going on!

Dancing at the Kasbah

One of the things I love going to in the evenings is the Kasbah, about a five-minute walk from the Eugenia Victoria Hotel. The Kasbah is a complex of shops and restaurants, but at its centre is an open-area square where people can dance. There’s music there every night, sometimes live.I went there last year and this year, I notice some of the same people up on the dance floor and some putting on quite a show. There’s one couple who mimicks a bull and matador, quite entertaining, and the crowd loves it. 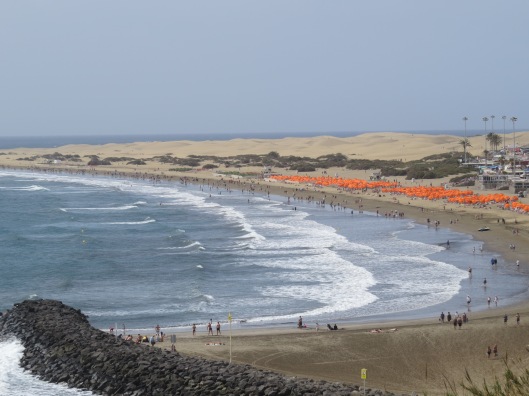 From the boardwalk at Playa del Ingles, looking out over the beach and the beautiful sand dunes beyond, one of my favourite places.

Let’s not forget my favourite treat at Cafe de Paris. After a long walk on the beach or something for a mid-morning snack, there is nothing that beats a Danish and cappuccino at Cafe de Paris, a great place too for people watching.

The Maspalomas Carnival takes place from March 3rd to the 12th, and this year it is called The Euro Carnival. Many of the carnival evening activities take place onstage at the Yumbo Centre in Playa del Ingles. It is a raucous and colourful event with singing, bands, children’s performances and  dancing. The costumes are colourful, glitzy and flamboyant, and the participants are exuberant and theatrical. 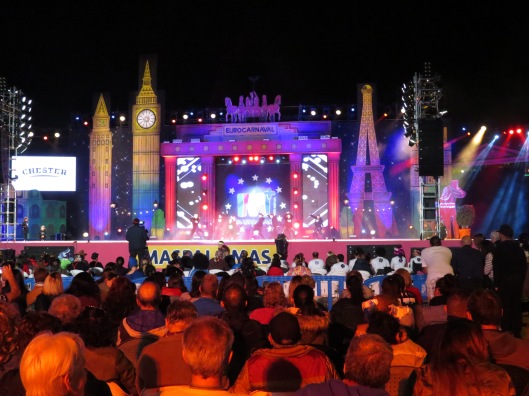 Main stage for performances of the 2017 Maspalomas Euro Carnival

There are also a selection of queens within various categories. For example, there is the main Carnival Queen, but also a “Senior Queen” and a Drag Queen. I attended the “Senior Queen” selection last night. It was interesting to attend an event where there were older participants vying for the prize. What a wonderful way to get everyone involved and where age is not a barrier. Tonight is the selection for the Drag Queen.