The History of Las Palmas

The city was founded in 1478 by Juan Rejon, who invaded the island and engaged in war with the local indigenous people. He established a fort, Real de las Palmas, becoming the first foundation of Las Palmas. In 1492, Christopher Columbus arrived in Las Palmas, and it was from here that he launched his first trip to the Americas. The Canary archipelago had many advantages to facilitate navigation to the West. As well as the beneficial trade and ocean currents, it was also a place to stock up on supplies for the Atlantic crossing. Thus, the canaries became a huge centre for trade and a departure point for exploration and emigration of the West. Interestingly, San Antonio, Texas, was founded in 1718 by about 25 Canary islanders and continues to be be a sister city to Las Palmas.

This museum, located in the historic district of Vegueta in Las Palmas, is called Columbus House because it is thought that on a stopover here, due to a repair required on his ship, La Pinta, in 1492, he stayed in this building, which was back then the residence of the first governors of the island.

This building is recognized as one of the most attractive in Las Palmas, with its lovely typical balconies, interior courtyards and beautifully carved wooden ceilings. The museum attracts visitors fascinated with the exploits of Christopher Columbus. 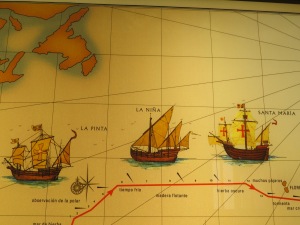 On display, in its thirteen exhibition rooms, are intriguing items related to his exploration of the Americas, from a replica of Columbus’s cabin on one of his ships, La Nina, to  navigation instruments, nautical maps and charts, models of his three ships and letters written by Columbus to Queen Isabella of Spain. What I found particularly interesting was a video screen that traced each of his four journeys across the Atlantic to the Americas, from the Canary Islands. Through this representation, the history of his voyage comes alive

This museum has a large collection of many artifacts related to the Canarios: stone implements used as tools, and mills and mortars to grind grain; the types of grains used; items made from animal skins such as clothing and items made from vegetable fibre such as mats. Part of the complex social structure of the Canarios was the use of seals. Specific groups within this island culture were able to be distinguished from other groups by markings on their body which were applied by a seal that had a particular design; different groups were defined by different designs.

A fascinating part of the museum is related to a focus on funeral rites, where the Canarios “mummified” their dead. They had funeral chambers in caves and buried the bodies using funerary rites, such as burying items with the dead for the after life.

Their ceramic collection is comprehensive in that it has examples of pottery from all the other islands of the archipelago, as well as from Gran Canaria. It shows the most representative pieces from every island focusing on the various shapes, decorative motifs and their purpose whether they were for practical uses such as for storage of food or cooking, for a ritual function or simply decorative use.

The Cathedral of Santa Ana

The Cathedral  is the seat of the Dioceses of the Canaries in the Roman Catholic Church. Building started in 1500 and didn’t finish until the 18th century, so it has lots of styles included in it structure, from renaissance Gothic from its original design to neoclassical exterior that was continued in the second half of the 18th century. For one and half Euros, you can take a lift to the roof of this church and from there, you have a wonderful view of Las Palmas and the harbour front.

A bus ride from Playa del Ingles to Las Palmas takes about 50 minutes and costs just over five Euros.What would a trip to Las Palmas be without a bit of shopping involved? One of the main shopping areas, which I really enjoy, was walking along Trianna, a pedestrian walkway lined with small shops, name brand stories and restaurants. If you look up the side streets that run off of Trianna, there are many more small cafes and restaurants with outdoor seating and umbrellas for protection against the sun.

Based on directions from the Information Kiosk, I walked up one these side streets in order to get to the post office to mail a package home to Ottawa. Not only did I find the Post Office, but did quite well in my faltering Spanish to explain what I wanted to do. It went pretty well, but I had rehearsed! As I walked up the side street, I found many people seated at various cafes enjoying a breakfast or coffee with friends or co-workers. Along the way I stopped for a Cappuccino and noticed that the cafe I had selected was also Vegan, one of the only ones I’ve encountered to date on Gran Canaria. My daughter and son-in-law would be pleased!

Back at the hotel, Eugenia Victoria, I was pleased to see that the entertainment for the evening was Flamenco! 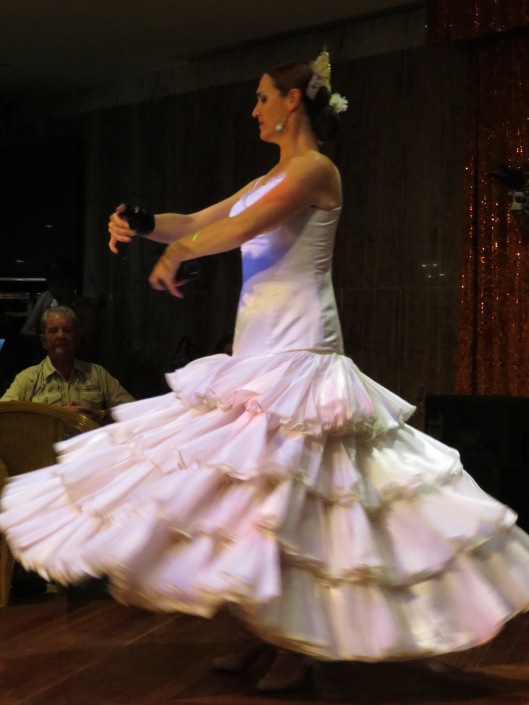