Getting into Montevideo from the airport

When arriving at the Carrasco Montevideo International Airport I highly recommend  B&B Remises Airport Transfers (www.bybremises.com).  For $36 American they will take you into Montevideo, about 17 kilometres to the city centre. Not only did B&B Remises answer all my questions in advance of arriving at the airport, they sent me, by email, a photo of my driver, who was waiting for me with a big smile and holding a sign with my name on it, absolutely no confusion there. If you’re a woman travelling solo, this kind of service offers a real sense of security when you’re arriving at a city you’ve never been to before.

Staying at Axsur Hotel while in Montevideo 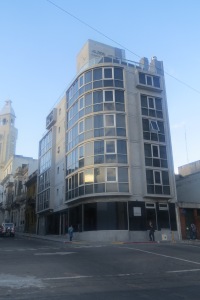 When planning a trip, I often go to Trip Advisor for recommendations. It’s noteworthy that Axsur Hotel is highly recommended by both Trip Advisor and Booking.com. It’s located in the “Old City”, where many of the sites, plazas, markets, shopping, restaurants, cafes and museums are located within easy walking distance. However, if you need to get a taxi to go further afield, as I did today to a music festival being held at Park Rodo, all taxis are metered and very reasonable. Looking out from my room I have a lovely view of the Rio de la Plata River. Breakfast is buffet style and offers a huge range of about every food group you could think of, and most important, the coffee is good and in unlimited supply.

View of the Rio de la Plata River from my window

The friendly and helpful receptionist at Axsur Hotel 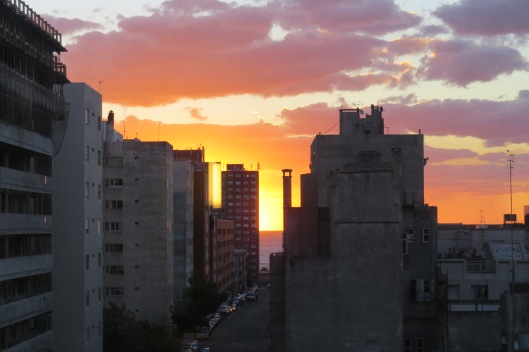 Sunset from my window

A great blog on Uruguay

Before leaving Ottawa I came upon a wonderful blog written by Karen Higgs, who now lives in Montevideo. The blog has comprehensive information on all of Uruguay and you can find it at www.guruguay.com/blog/. I highly recommend it. Out of the blog she has evolved a book entitled the Guru’guay Guide to Montevideo, available on Amazon.com.  The author calls Uruguay one of South America’s off-the-radar destinations, but I believe it will quickly grow in popularity, as it appears to have much to offer in terms of history, cuisine, artisan products, plus much for the outdoor enthusiast. And by the time I leave, I will have only scratched the surface as my stay in Uruguay centres around Montevideo and Punta del Este. It looks like I’ll have to come back to go further afield to explore the countryside. 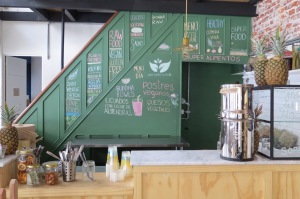 While exploring Montevideo today I came upon a Vegan restaurant. My daughter Amanda would be happy to hear about it! The Vegan diet certainly appears to be one that is gaining popularity around the world, and even if it’s just starting to gain ground in Uruguay that’s an accomplishment!

Here’s why. The population of Uruguay is 3.3 million and it also has 12 million cattle. Much of the meat is for export, but Uruguayans are reputed to be the leading consumers of beef per capita. In a book entitled “Uruguay”, a travel guide by Tim Burford, he quotes a 2010 survey where it was reported that Uruguayans eat about 58.2 kg of beef per year.

A lesson in preparing mate

Back to the Mate. While having a bite to eat in the Vegan restaurant, I struck up a conversation with Ivana, sitting at the same communal table and drinking Mate. I got a bit of a lesson on the preparation of Mate: first the gourd is completely filled with Mate (no tea bags here), then a small indentation is made so water can be poured into the gourd. The water must not be boiling hot, but hot enough to create an infusion with the Mate. The hot water is kept in and poured from a thermos. The steeped mate is drunk with a metal straw that filters out the mate leaves, when that is done, more water is poured into the gourd. Part of the ritual, for some people, is to share their Mate, so it’s often passed around. But Ivana says she prefers to keep her Mate to herself, and not worry about the spread of germs! There is no question that Uruguayans love their Mate, one hand holds the gourd, and a thermos of hot water to replenish it is never far away. 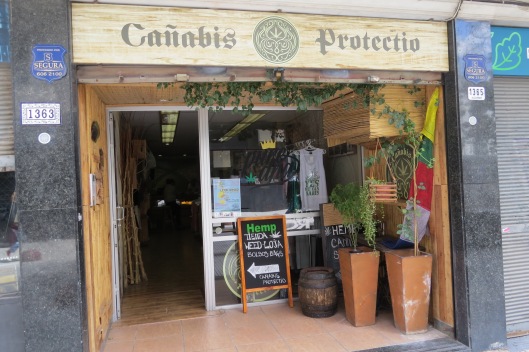 Did you know that Marijuana is legal in Uruguay?

The music was for adults, but it was interesting to see a huge number of activities for children including workshops on how to make a drum and many others on using recycled materials for all ages of children. It appeared to be a real family affair. Plus there were many booths offering artisanal products and many varieties of homemade foods. And then there were the clowns…