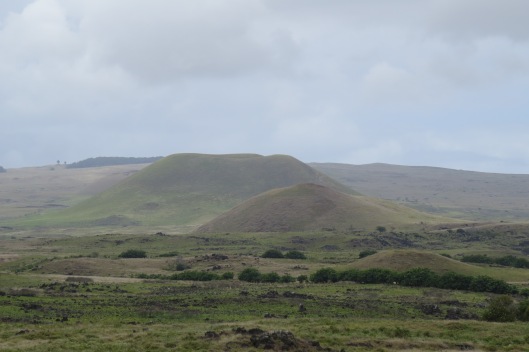 Typical scenery on Easter Island, looking out to the sea

A bit of history:  Rapa Nui, or Easter Island, is a volcanic Polynesian island in the Pacific Ocean, approximately 3,510 km west of Chile. It is located at the most southeastern point of the Polynesian Triangle (other vertices are New Zealand to the West and Hawaii to the North) and is one of the world’s most remote inhabited islands with an area space of only 63.1 square miles. Members of its indigenous community are referred to as Rapa Nui. The original settlers of Rapa Nui were of South-east Polynesian descent, most likely from either the Gambier Islands(1,600 miles way) or the Marquesas Islands (2,000 miles away), settling the Easter Island sometime around 800 to 1,200 AD; there is still a lot of debate about the exact date. Easter Island is a UNESCO World Heritage Site.

Many wild horses roaming free on the Easter Island

Indigenous Easter Islanders’ oral tradition regarding the original settlers state that a Polynesian chief, Hotu Matu’a, arrived on the island in large canoes with his wife and extended family. The actual name, Easter Island, originated with the European explorer Jacob Roggeveen, who first saw the island on Easter Sunday, 1722.Easter Island is on a lot of travellers’ wish list and for good reason. The enigmatic statues, called Moia, are nothing short of astounding. Who made them? How did they transport these huge statues weighing tons? What is their significance?

Moia at Anakena Beach, some with hats

I will try to answer some of these compelling questions as we explore the Easter Island together. With the exception of Moia at Ahu Akivi, all of them stand with their backs to the sea, looking inward to the land, watching and perhaps even guarding over the communities that existed at that time. Most archaeologists believe that the Moia represent the spirits of ancestors, chiefs, or high-ranking males who had passed away.

Ahu Tongariki site with 15 Moia, notice they have backs to the sea and look inwards to where the community would have been. 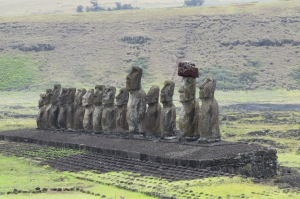 Ahu Tongariki with distinct Ahu or platform below the statues.

They were placed on rectangular stone platforms called Ahu, some of which are tombs for the people that the statues represented.  The Moia were constructed most likely starting around 1,200 AD and continuing into the 17th century. All the Moia we see today were reconstructed and refurbished on their Ahu platforms (about 50). The Easter Island experienced upheaval and conflict starting in the 17th century which led to the “Huri Moai” phase, or toppling of the Moai. By the mid-nineteenth century, all Moai had fallen either due to earthquakes or deliberate toppling by warring.

On average, the statues are 13 feet (4 meters) tall and weigh 14 tons, but the largest erected statue called “Paro” is located at Ahu Te Pito Kura and is 9.8 metres high and weighs 74 metric tons; the largest statue remains at the quarry Rano Raraku, “El Gigante” is 21 metres high and weighs an estimated 170 metirc tons. They must have figured he would have been just to heavy to move! 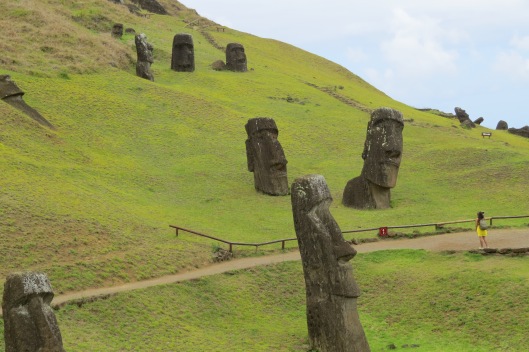 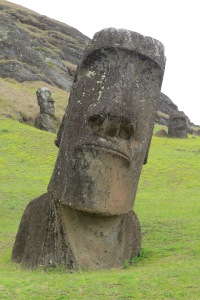 Practically all statues were carved from the quarry at Rano Raraku, an extinct volcanic crater, from tuff (a compressed volcanic ash), then they were transported to various locations around the island. It is believed that carving of the Moai started around 1,200 AD and continued until about 1,680 AD. The head, three-eighths the size of the whole statue, is characterized by a long snubbed nose, deeply inset eyes, prominent cheekbones, fine lips, a prominent chin and large ears. Some wear a cylinder-like hat made of red stone. It is estimated by archeologists that there are between 887 and 1,000 Moai on the Easter Island with over 300 still remaining at Rano Raraku, 230 were moved to other parts of the Easter Island and others lay broken or buried. They were most likely moved to their final destination by using a combination of a sled and/or rollers.

Type of stone used to carve the Moai

The building of the Moai, associated with the Ancestor Cult, ended sometime in the 17th century. This Ancestor Cult, a political system, centred around a King and his sons, hereditary leaders, who inherited power and who would then lead the various tribes or “Mata” of the island. This chiefly kinship system was very common in Polynesia.

It is difficult to say if the Ancestor Cult was replaced or ran alongside the “Tangata Manu” or the birdman ritual until the arrival of the Catholic missionaries in 1864. What is known is that the building of Moia significantly fell away in the 17th century. 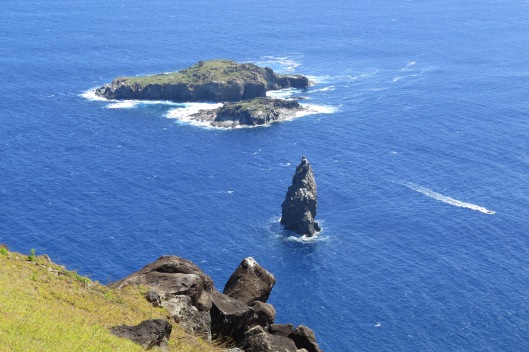 The offshore islet of Motu Nui where the egg of the sooty tern was collected.

Rano Kau Volcano; the competitor would have to scale the sea-side cliff of Rano Kau with the egg from Motu Nui

The birdman ritual was a competition based in the village of Orongo situated near the cliffs of the volcano Rano Kau, once the nesting place of the “manutara” bird, or sooty tern. During the birdman competition the objective was to obtain the first egg of the season from the offshore islet Motu Nui. A representative from each tribe of the island would descend the sheer cliff at Orongo, swim to Motu Nui, find the first egg, swim back, and scale the cliff of Rano Kau. The first one to bring back an egg would win the title of “tangata-manu” or birdman of the year for his chieftain thus winning great privileges for themselves and their tribe. With the introduction of Christianity, the Birdman cult ended. Did the Birdman cult co-exist with the Moia-based system, or did it replace it? No one knows for sure.

The Easter Island is an absolutely fascinating place to visit and I recommend it highly not only for its enigmatic Moia statues and fascinating and mysterious history, but for its interesting geography of extinct volcanic craters that dot the landscape, its roaming wild horses, lovely Anakena Beach, its often rough and rocky coastline, excellent seafood restaurants, beautiful sunsets, Polynesian shows and also sense of tranquility that pervades the island, one of the most remote in the world referred to by some as the “Te pito o te henua” or “the Navel of the World.”

The Capital City of Easter Island: Hanga Roa located in the south-western part of the island is the main town and capital of Easter Island. It is a small town (you’d never get lost walking around it and everything is accessible within walking distance) with a population of just over three thousand, most residents of the Easter Island live in Hanga Roa.

Horseback riding on the street in Hanga Roa

If you go to the Easter Island, staying in Hanga Roa will allow access to many fine seafood restaurants, car and bike rental places, tourist and artisan shops, guided tours of the island and Polynesian shows. If you stay outside the town, you’d better pick up a rental car once you arrive in Hanga Roa! The airport is a short, five-minute drive into town, and I would say without exception all hotels, inns and B&Bs offer the courtesy of a pick-up from the airport and drive you back to it when you leave.

Not-to-miss sites: Anakena Beach, Rano Raraku (the quarry), Ahu Tongariki, Orongo Ceremonial Centre where you also find the Rano Kau Volcano. As my brother says, everything else is icing on the cake. There are several Moia just outside the town of Hanga Roa within walking distance and also a very good museum, again just outside Hanga Roa, (with English translations) worth visiting to get a grasp on the history of Easter Island, its culture and Moia. 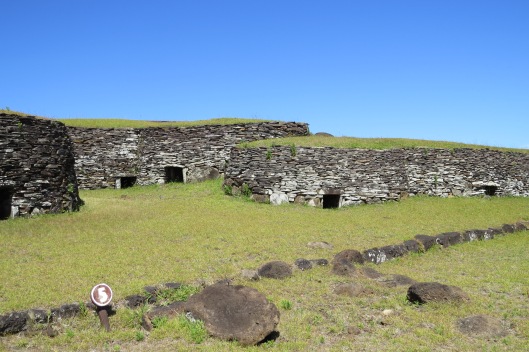 Stone houses at Orongo, just on the other side is the steep cliff looking out over the islet of Motu Nui where the birdman competition took place.