Donegal Town in County Donegal is located on Donegal Bay at the base of the Bluestack Mountains. The River Eske flows into Donegal Bay. Like most Irish towns it is charming and picturesque with a town centre known as the Diamond, which is an open pedestrian area surrounded by hotels, shops, pubs, restaurants and coffee houses. One restaurant that stands out that I visited several times was “The Blueberry”, with lunches, dinners and delicious desserts.

While in Donegal I took a boat trip on Donegal Bay and visited Donegal Castle. From Donegal I took a day-long tour with Donegal Tours (www.donegaltours.ie), which I highly recommend as a tour company. They use smaller mini vans which makes the atmophere of the tour more friendly and enjoyable.

With Donegal Tours, I visited the following point of interests:

The spectacular Slieve League Sea Cliffs are one of the highest marine cliffs in the whole of Europe, with a six hundred metre drop down to the ocean, part of the Wild Atlantic Way. Glencolmcille and the Folk Village is a collection of beautiful, traditional thatched cottages. It offers an insight into how the local people lived over the past 200 years. Ardara, a Heritage Town, is home to the ‘Donegal Tweed’ and one of Ireland’s best known traditional centres of tweed and knitwear production. Final stop was at the Glengesh Pass a glaciated valley that was created 12,000 years ago.

When I left Donegal, I caught the bus right in front of the Abbey Hotel with direct service to Sligo. Once in Sligo, I took a train back to Dublin where I stayed one night before taking a plane back to Ottawa. 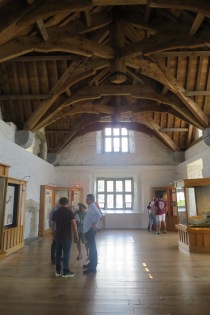 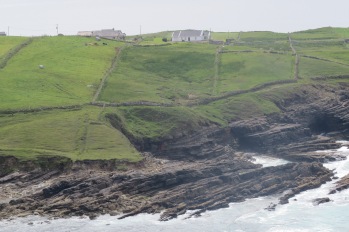 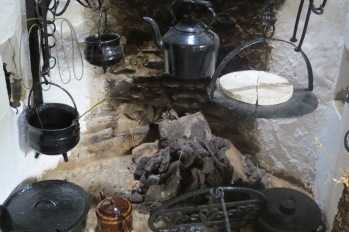 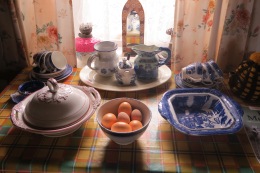 Letterkenny from its Irish roots means “Hillside of the O’Cannons” and is the largest town in County Donegal. The best part of Letterkenny is that it is close to one of the most beautiful parks I have ever visited, the Genveagh National Park and the Glenveagh Castle and Gardens which is set in 16,500 hectares of mountains, lakes, glens and woods.

Glenveagh Castle was built between 1870 and 1873, by Captain John Adair, and is defined as being “castellated” which means it has battlements like a castle, but it is not used for defense. Surrounded by the famous Glenveagh Gardens, its construction in a remote mountain setting was inspired by the Victorian idyll of a romantic highland retreat. John Townsend Trench designed it.

The first photos in this mosaic are of the town of Letterkenney and include street views, its major church, an antique shop, a monument and a very interesting hat shop that I would definitely go to to buy a hat if I was to go to the Queen’s races!

The photos following the ones of the town are those of Glenveagh National Park and Gardens. I hope that I have captured the beauty of this incredible place. 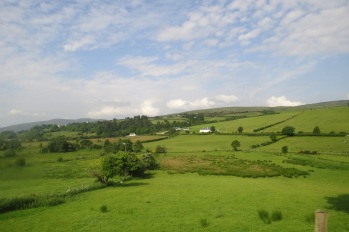 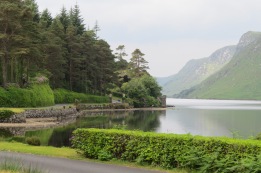 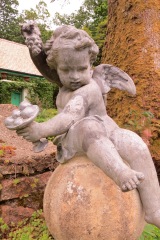 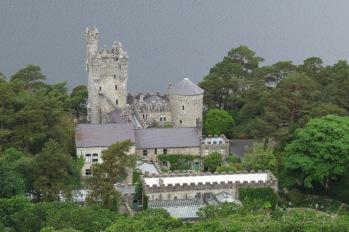 Westport is a town in County Mayo at the south-east corner of Clew Bay, an inlet of the Atlantic Ocean on the west coast of Ireland. A popular tourist destination, it scores high marks for quality of life. It won the Irish Tidy Towns Competition three times in 2001, 2006 and 2008. In 2012 it won the Best Place to Live in Ireland competition run by The Irish Times. The famous pilgrimage mountain of Croagh Patrick lies 10 km west of the town, forming a backdrop to the town and Clew Bay.

Westport House is a much visited tourist attraction owned by the Hughes family. It is situated in a parkland setting with the lovely Carrowbeg River nearby along with terraces and garden views.

There are several forest walks starting at Westport House. One walk takes you to The Quay and Clew Bay. The quay was once busy port but it is no longer used for commercial shipping, but is now known for its many warehouse conversions, restaurants, pubs and a museum. From here, one gets an interesting perspective of Ireland’s Holy Mountain, Croagh Patrick.

Grace O’Malley was a pirate who defied Elizabeth 1, the English monarch, for almost 40 years by plundering English ships and fiercely repelling the forces that tried to take her family’s land. She was born around 1530 to Owen O’Malley, the chieftain of a clan who ruled the area around Clew Bay for more than 300 years. During that time, they built wealth from both piracy and legitimate trade with France and Spain.

Listowel is also known as the Literary Capital of Ireland, as many famous Irish authors come from Listowel and the annual Writers’ Week is held there at the beginning of June. For example, John Brendan Keane (1928 – 2002) was an Irish playwright, novelist and essayist from Listowel, famously known for his play “The Field”, which was also made into a movie. He was very much influenced by the local population and the patrons of his Listowel pub (which today is run by his son Billy) from which he based some of his characters on.

Listowel is a typical, friendly Irish town with everything within walking distance of its colourful main street and with many restaurants and pubs. You’ll never have to walk far to find a Guinness. The River Feale runs alongside Listowel with a charming scenic river walk through forested area that passes by an ancient stone bridges and leads one to a lovely garden with flowers in bloom when I was there in June.

I attended the Listowel Writers’ Week in June 2018 and what a bustle of literary activity it was, from literary workshops, plays, political discussions, poetry, talks and author interviews, author readings and even a literary and historical bus tour to Ballybunion and a stop at The Thatch pub in Lisselton.

I thoroughly enjoyed Writers’ Week and recommend it to anyone who wants to learn more about Irish writers, Irish theatre and have a bit of “craic” (defined as Irish fun, gossip, jokes, entertainment or lively conversation) at one of the many local pubs, or at the Listowel Arms Hotel where registration for the writers’ week was held and where many events took place. The Listowel Arms Hotel is a traditional hotel run by the O’Callaghan family and is located right in the centre of this quaint heritage town.

Listowel hosts many other annual festivals including the Listowel Races in September and the Listowel Food Fair in November.

Across the street from the Listowel Arms Hotel is St. Mary’s Church and within the church is St. John’s Theatre, the venue where the many plays during Writers’ Week took place. St. John’s Theatre is a premier venue for the promotion of the visual and performing arts and features the best local, national and international in theatre, music and dance. Annually St. John’s hosts approximately 160 arts events comprising of 80 theatre presentations, 60 music/dance events and 20 exhibitions.

Listowel Castle was the last bastion against Queen Elizabeth I in the First Desmond Rebellion. It was built in the 15th century and was the last fortress of the Geraldines. It has been restored to some of its former glory and is one of the best examples of Anglo-Norman architecture in County Kerry. It is open to the public for tours on a daily basis.

I left Listowel by bus to travel to Westport. The bus stop was right on the town square a two-minute walk from the Listowel Arms Hotel. Nothing is too far away in Listowel! 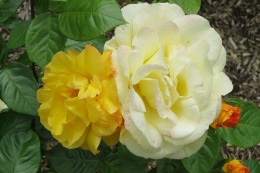 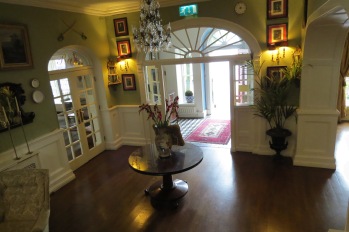 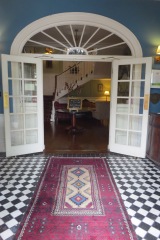 Ballybunion is a coastal town and seaside resort in County Kerry, Ireland, on the Wild Atlantic Way, 15 km from the town of Listowel. The famous Castle Green, where Ballybunion Castle sits, divides the two main beaches, with the Ladies Beach on the right and the Mens Beach to the left, names given to the fact that both sexes swam on separate beaches on the orders of the local parish priest, who, in days past, walked it daily to ensure the rule wasn’t broken. A wonderful tradition of Ballybunion is their Seaweed Baths, featuring sea water with kelp.

The ruins of Ballybunion Castle stand proudly on the cliff top overlooking the sandy beaches. It was constructed in the early 1500s by a branch of the Geraldine, the Fitzmaurices, who were lords of County Kerry. 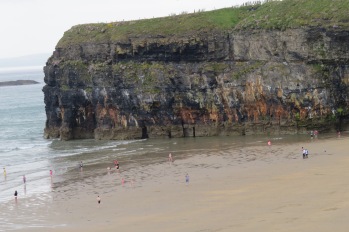 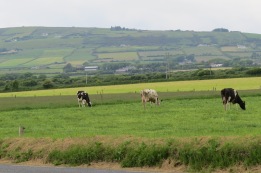 I traveled to Ireland in June 2018. I absolutely love Ireland, the scenery is pastoral with its many shades of green, its towns are charming and colourful, and the Irish are friendly and hospitable. It’s no wonder that the Gaelic expression “cead mile failte” which means “one hundred thousand welcomes” truly applies in Ireland.

The 2018 trip included a few days in Dublin, a trip by train to Tralee, County Kerry to visit friends and to revisit Killarney National Park. I went on to travel to Listowel where I took in several events related to their Writers’ Week. I traveled by bus from Listowel to Westport, Westport to Letterkenny and Letterkenny to Donegal. From Donegal I went by bus to Sligo where I caught a train back to Dublin.

Bus and train travel throughout Ireland is very efficient and comfortable and I highly recommend it as a way to get around. No need to adjust to driving on the left-hand side of the road along narrow roadways. I’ve heard that some people take to it like a fish to water, and others white knuckle it the whole time! I decided not to tempt fate and figure out which kind of driver I was.

Killarney National Park, just outside Killarney town offers an unparalleled experience – a ride in a jaunting cart pulled by …