A bit of history of the Tango

Inside the Museum of Tango in Montevideo

Tango is the most well known South American dance. It’s a dance full of passion, rhythmic movement and sensuality, a dance that also involves much skill. It is said here in Uruguay that the Tango began in both in Uruguay and Argentina at the same time, starting in the working class neighbourhoods near the ports, amongst European immigrants, many of whom were of Italian and Spanish origin, in about the mid to late 1800s. Another early influence on the Tango were the candombe rhythms of Africa and the musical beats of milonga. 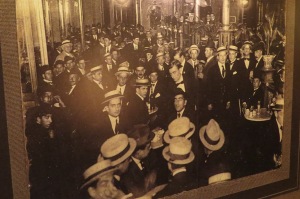 Photo from tango museum showing only men at the dance hall

In the early days of the Tango, men danced with men, in bars and dance halls, places where it wasn’t considered “respectful” for women to be attendance. Men practised how to dance with other men so when the opportunity arose, he might impress a sweetheart with his dancing skills and possibly win her heart.

The tango was at first held with much disdain amongst the upper echelons of society and considered to be a dance associated with the “seedy” areas of the city near the brothels. But that changed. The Tango eventually gained popularity with them and spread to Paris, London and New York by 1913 and worldwide in the 1920s and 30s. A very famous classic Tango piece “La Cumparsita” was written by an Uruguayan,  Matos Rodriguez in 1916.  The Tango Museum of Montevideo offers the inside scoop on how the Tango evolved in the dock areas, bars and dance halls of Montevideo. The museum is located in the ground floor of the Salvo Palace, just off Independence Plaza.

The Tango at El Milongon

I attended the El Milongon Cabaret show. It was a great show that brought together many of the dance forms of Uruguay from the African candombe, which began 200 years ago when black slaves were brought  to Uruguay from Africa. The candombe rhythm is created with three types of drums with different pitches: piano, chico and repique. It is considered the most representative expression of the Afro-Uruguayan culture.

Included in the show were the folkloric dances of the gaucho.

Dancing on the Streets of Montevideo

If you’re lucky you’ll run into candombe being performed on the streets of Montevideo. This group was performing their music and dance near the Mercado del Puerto. You know you’re near this market when you see the haze of smoke arising from the numerous “asados”—the grilling of steaks, sausages and chicken. Around the exterior of this market are booths of artisan products.

Close to the Mercado del Puerto is the Museo del Carnaval.  Here, you get a real sense of the colour, vibrancy and music of the Montevideo Carnival, a carnival that runs every year, starts in January and runs into February and lasts about 40 days. After experiencing only in small part the dance and music of Montevideo over my week’s stay I can imagine the carnival to be a mind blowing and exceptional experience!

2 thoughts on “Montevideo: Alive with Music and Dance”